"From a rain-soaked groundbreaking last year to the cheers of school children last week, the Joe Redington Jr./Sr. High opened with an upbeat celebration. The first and last sleds run in the Iditarod by Joe Redington Sr. are displayed on the library wall. The mascot is the Husky.

Built in the Knik-Fairview area, known as the fifth largest community in Alaska, the school already has 100 more students than expected. At 96,000 square feet, Redington High is the largest school built in the Mat-Su in the last 14 years.

The school is one of the many projects funded in the $214 million school bond package, approved by voters in 2011. The State picks up 70 percent of the cost of the school, thanks to local legislators.

Wolf Architecture and Collins Construction built the school on time and under budget on a challenging site. More than 90 percent of the workers on the job were Valley subcontractors and employees, said Borough Project Manager Bob Bechtold.

"Collins Construction performed superbly throughout construction of the new school and provided $743,000 back to the contract through the value engineering process with the GC/CM General Contractor/Construction Management contract," Bechtold said. 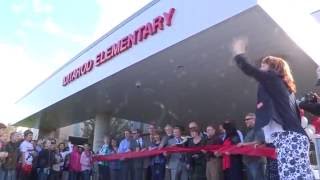 Start of the Iditarod Elementary School 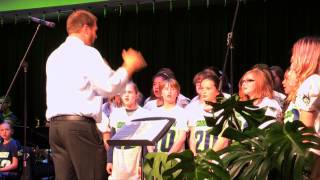